Offering the Finest Products and Services

Ken Lindsey founded the G&L Oil Company back in 1938 to become a distributor of Sinclair oil and fuel products in the Tiffin/Seneca County area. In 1942 Ken moved the business to the present location of G&L’s bulk plant and the business became a Texaco distributor.

Kim Walton’s father, Doyle Sensmeier, was a manager for the Texaco Oil Company for Ohio and the surrounding area. In 1968 Mr. Sensmeier left the company and, along with his wife Bea, founded the Sensmeier Oil Company in Mansfield, Ohio.

Growing up working in the family business, Kim soon became inspired to own an oil company of her own.

With the encouragement and support of her mother and father, Kim purchased G&L Oil in 1989.

Kim has steadily grown the business, adding her own semi-truck transport, expanding the oil business from local to regional marketing, adding employees, building a service station/convenience store, adding a car wash, and moving to the present 24,000 square foot office and warehouse. 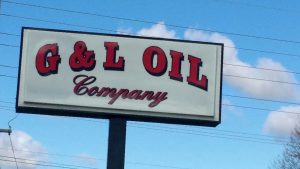 Today, Kim and her staff of 23 stand ready to serve all of your petroleum products needs. And their dedication to quality, service and you the customer will continue to meet those needs for years to come.